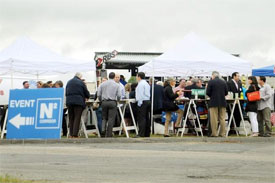 A 500-acre parcel of land that borders Route 95 is undergoing a complete re-development as Mayor Warren and elected officials in Needham are trying to develop the parcel into an attractive place for high-tech companies to set up and begin their business. TripAdvisor, which currently employs 500 people in Newton on Needham Street, announced in December of 2012 that it couldn’t find suitable office space to grow its business in Newton.

Wicked Local reports, “last month Newton Mayor Setti Warren went as far as Israel as part of a mission led by Gov. Deval Patrick to promote the N2 corridor. The mayor returned with the news that he had interested several Israeli companies in visiting the corridor to consider expanding or relocating there. Officials say that’s good news for Newton and Needham because of the added jobs and tax revenue new businesses could bring in.”