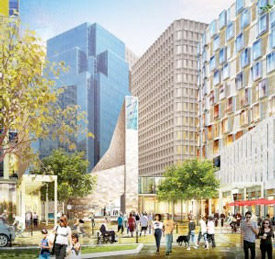 The Winthrop tower development site can take a couple of different paths, mixed use or all residential.

The two largest development proposals for Boston’s Winthrop Square have starkly different visions for an overlooked corner of the Financial District. Both developers Steve Belkin and Thomas O’Brien propose 725-foot-tall towers with a substantial allotment of luxury condominiums, reflecting the current market’s hottest category. But their approaches diverge in satisfying the Boston Redevelopment Authority’s requirements for an innovative economic development strategy and new downtown public spaces.

Six developers submitted mixed-use proposals for the 1-acre municipal garage site at 115 Federal St. The BRA will hear presentations from them in coming weeks with a goal of designating a developer by the end of June. That would set the stage for a review under the BRA’s Article 80 process for large developments later this year.