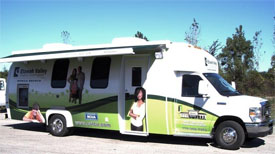 Your bank comes to you, no not via an App or the internet, but rather the roadways. This give a whole new meaning to mobile Banking. Look for this from East Boston Savings to service schools, nursing homes and perhaps areas of Boston’s CBD.

According to the BBJ:

East Boston Savings (Nasdaq: EBSB) has asked state regulators for permission to open a so-called mobile banking branch, essentially a bank on wheels, complete with a teller window, ATM, and space for two desks, not to mention security cameras and an alarm system. While mobile offices are relatively popular in other parts of the country, only one Massachusetts-based bank in recent memory, Century Bank, has applied for and received approval for a mobile banking unit, and it never put a vehicle on the road, according to the state Division of Banks…Assuming the itinerant office gets the government’s OK, Gavegnano wants to put the branch on the road as soon as May. Four clients have already committed to a weekly visit from the mobile branch, including a manufacturing facility, assisted living facility, and two high schools, and more customers have expressed interest, [East Boston Savings CEO] Gavegnano said.

The East Boston Savings branch will be staffed with two tellers and a full-time driver.