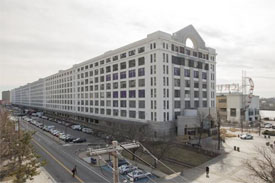 What does it take to convert a former munitions building to full commercial use?

Well, some history of the site according to Wikipedia.  The Department of Defense purchases the site in 1920 and split it up between the Navy Annex and the South Boston Army Base.  During World War II the site was used as a machine shop, power plant, barracks, dry dock warehouse.

Post World War II the annex was used to store ships and in 1074 the City purchased the site and it became the Boston Marine Industrial Park.  As our city expand we need to accommodate more commercial use and less industrial use and Jamestown is looking for approvals to do so.

The Boston Business Journal reports, “last year, Jamestown Properties bought the Boston Design Center from Millennium Partners for $72.7 million and the adjacent Bronstein Center for $48 million. The 1.4-million-square-foot complex is located at 21, 23, and 25 Drydock Ave. at the far end of the Seaport District.”

Details on Marine Park and the potential commercial conversion, head over to the BBJ’s website.