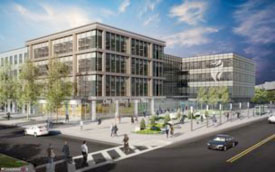 As rents have continued to rise and vacancy has dropped, landlords are becoming more bullish on the office market future.  Spec buildings, previously considered a thing of the past due to the high cost of construction (compared to the cost of renovating an existing structure) are reemerging in the Hub’s commercial landscape with a new addition to Boston’s marine industrial park.

The Boston Business Journal reported, “Danvers-based Kavanagh Advisory Group is expected to break ground by year’s end on the first new building in six years on the eastern edge of the Hub’s Innovation District.”

Details on the spec building are available on the BBJ’s coverage of the new development at Marine Industrial Park.