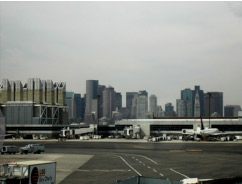 Good enough for GE, good enough for me.  Boston is number one for  a major U.S. city with its international airport 3.5 miles from downtown.

A recent BBJ article notes, “access to transportation is one of the key reasons that General Electric Co. set its sights on Boston’s Fort Point neighborhood for its new headquarters, said Gov. Charlie Baker at a business luncheon in Waltham on Wednesday. Not necessarily public transportation, he said, but air transportation.

What Cities Gain When Their Airports Are Close to Downtown. This is a piece that came out in 2012, interesting enough, we don’t move our airports or our city centers.