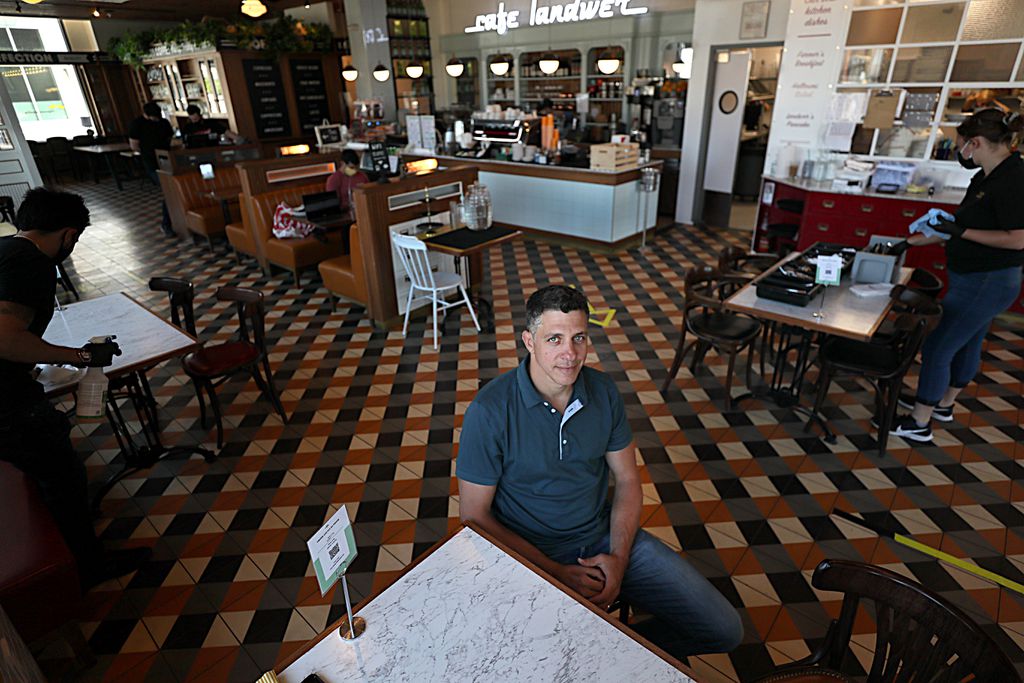 It’s a tale of two cafes, and a story that’s playing out all over town.

Nir Caspi owns Cafe Landwer, with locations in Cleveland Circle and Audubon Circle. Both opened in the last three years on the ground floors of new residential buildings. Both were doing well serving fine coffee, kebabs, and Israeli breakfast specialties before COVID-19, Caspi said, but business has suffered since the virus brought the economy to a crashing halt. He is confident one will survive. The other has been in limbo.

That’s largely because Caspi’s two landlords have taken different approaches to the crisis.

It is a delicate dance, with high stakes for all. Over the last four months, many restaurants and retailers have been engaged in seemingly endless negotiations with the owners of the buildings they occupy. Rent typically accounts for an enormous chunk of tenants’ fixed expenses, and with revenue scarce, they can’t pay it. But landlords have bills to pay, too — including mortgages, and property taxes — and some are accountable to investors. For them, it’s a matter of weighing a desire to be flexible with tenants against the need to meet financial obligations.

The fate of an entire generation of small businesses could be at stake in this fraught balance, the kind of places that collectively employ thousands of people and often help form the fabric of their neighborhoods.

At the Cleveland Circle cafe, his landlord is National Development, a prominent Boston builder that developed the South End’s Ink Block and other big projects that blend uses such as housing and retail. When the state urged people to stay home and ordered nonessential businesses to close, National came to him right away, Caspi said. It offered a deal that allowed him to pay rent based on a percentage of sales instead of a fixed amount. He kept the cafe open as a result and has been taking a steady stream of orders throughout the pandemic.

“From day one they’ve been reaching out and asking us how we’re doing and how they can collaborate,” he said. “They’re taking the initiative to help me from their side and not waiting for me to beg for mercy.”

Caspi said his dealings with his landlord at Audubon Circle, which is a small, family-run real estate operation, were more challenging. When the shutdown began, he tried opening for takeout, but made only a few hundred dollars a day because the college students who frequented the cafe had departed. So he shut down for several weeks until outdoor dining in Massachusetts resumed. All the while, talks with the landlord, Chestnut Hill-based developer Dan Yu, were tougher, and more intermittent than those with National Development. Caspi said Yu encouraged him to apply for funding from the federal Paycheck Protection Program. Caspi did, and received some money. But as the months dragged on, Caspi worried about finding terms they could both agree on.

Last week, Caspi said, he finally reached a tentative agreement with Yu, who did not return messages from the Globe.

“I can understand he has a mortgage and he wants to pay the mortgage as well,” Caspi said. “We need to find the right way for both of us.

These types of talks are taking place all over Greater Boston as the pandemic and related economic crisis drag on. With their futures intertwined like never before, tenants and landlords are trying to sort out a changed relationship on the fly. Brokers and others involved in these rent discussions say the variables involved in reaching an arrangement are many.

How successful was the retailer before the crisis? How leveraged is the landlord? Is the store in a larger office or apartment building — where retail rent is a smaller piece of the bottom line ― or is it a storefront location where rent revenue is critical? Most important, and hardest to know: When might business return to normal?

“It’s so tenant specific. It’s really landlord specific, too, in terms of what a decision will be,” said Whitney Gallivan, managing director of retail at Boston Realty Advisors. “No one knows how long this might last.”

Some landlords, especially larger ones with deep pockets, are leveraging their size and resources to help tenants ride out the downturn.

WS Development, which owns shopping centers such as The Street in Chestnut Hill and Marketstreet in Lynnfield, is coaching vendors on how to build their own marketing campaigns. It also launched “Storefront Stories,” a social media campaign that highlights business owners and workers as their stores reopen.

“It’s a peek into their lives,” said Lindsay Binnette, director of field marketing at WS. “A way for people to share what they’re excited about in reopening.”

Samuels & Associates, which in recent years has redeveloped a huge swath of the Fenway neighborhood, is converting plazas into outdoor seating for restaurants in its buildings, and helping tenants navigate new permitting processes at City Hall. It has three people working full-time on lease negotiations with 70 or 80 commercial tenants, said president Joel Sklar. The goal is to reach deals that make sense for everyone — including Samuels and its lenders.

“These are really complicated discussions,” he said. “It’s got to be balanced and it’s got to be a partnership. That’s what we keep hitting on over and over.”

Samuels also operates several million square feet of office and apartment buildings in the Fenway, so while retail rents are important, they’re a relatively small piece of the firm’s financial pie. The company used to own more traditional shopping plazas — it built Dorchester’s South Bay in the 1990s — and Sklar acknowledges the math for the large mixed-use projects it oversees these days is quite different.

“We probably have more flexibility than a shopping center that’s 100 percent retail and probably has 80 or 90 percent of its tenants asking for rent relief,” Sklar said. “That’s a really big issue in the retail world, and not one with an easy solution.”

Indeed, many landlords aren’t being as flexible. About 50 percent of members of the Massachusetts Restaurant Association and the Retailers Association of Massachusetts said in recent surveys that their landlords have been unwilling to adjust rents. Given the state of the economy, that’s an unrealistic stance, said RAM president Jon Hurst. Even national retail chains only paid 68 percent of their rent in June, according to real estate data firm Datex Property Solutions.

“There needs to be a repricing,” he said, meaning lower monthly payments.

Tenants, especially major ones, can also play hardball. National chains such as The Cheesecake Factory and Starbucks have demanded rent breaks, or halted payments altogether during the pandemic. The Gap Inc., stopped paying rent when many of its mall stores closed in the spring, prompting lawsuits from two of the nation’s biggest mall operators — Simon Properties and Brookfield Property Partners — seeking tens of millions of dollars.

But many tenants and landlords say having a good working relationship — ideally, one that predates the pandemic and will outlast it — is essential to figuring out how to survive. John Pepper, cofounder of Boston-based burrito chain Boloco, said he has spoken for hours with landlords at his seven restaurants, trying to navigate a new world in which both parties’ business models have been upended. He’s noticed one consistent thread.

“The smaller the landlord, the more personal the conversation,” Pepper said. “We’re in a place where we need to figure this out together.”

That has also been Charlie Talanian’s experience. The longtime Newbury Street landlord, whose tenant base includes hair salons and small clothing stores hit hard by the coronavirus shutdowns, has logged a lot of time on the phone, trying to work out rent agreements. These are small-business people, Talanian said, just like him. Most have never skipped a rent payment, and they don’t want to now ― they just need time to rebound.

“So it’s, ‘Can you pay half? Can you pay a quarter?‘ ” Talanian said. “We’re all in this together and let’s assess the damage when we get to the other side. I can’t be successful if I don’t have tenants.”