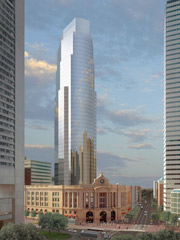 Texas and South Station come together. It appears that Hines from Texas is dusting off the plans of South Station that last saw the light of day over 10 years ago.

The Boston Redevelopment Authority in 2006 initially approved a development plan from Hines and Tufts University affiliate TUDC Inc. for a 1.8 million-square-foot mixed-use air-rights development, to be built in three phases between the back of South Station and the existing bus terminal. At the time, plans included a 40-story office tower, a nine-story office building and a 13-story building that contained 200 hotel rooms as well as up to 195,000 square feet of residential space. The three towers were slated to range in height from 183 feet to 678 feet total, according to a 2006 development plan.

Representatives from Hines have been to Boston’s City Hall several times in recent months to discuss the project and potential changes. If Hines were to move forward with a project that’s significantly different than the project the BRA approved in 2006, the firm would need to file a notice of project change, said BRA spokesperson Nick Martin. That would kick off additional project reviews such as a public comment period and approval from the BRA board, Martin said.