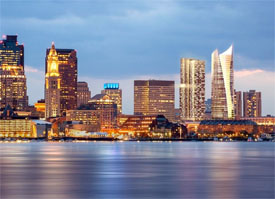 Government Center Garage will become a beacon of redevelopment for Boston.

The Boston Redevelopment Authority board gave its OK to a pair of towers on the site of the Government Center Garage straddling Congress Street. Construction on the first — a 480-foot luxury apartment high-rise — will begin this spring, developers say. The second — a 43-story office tower — will launch once it has secured a major tenant.

The towers are the first two phases of a six-building plan by the Boston development firm HYM Investment and National Real Estate Advisors of Washington to transform the giant 1960s-era garage into a complex of housing, office buildings and retail. When fully completed, the project would include 812 new housing units, 1.1 million square feet of office space, a hotel, and retail storefronts. It would open up the northern end of Congress Street for the first time in a half-century.