The Boston’s Globe’s former office site is poised to be an “Innovation Campus” to foster growth and creativity for our economy. Expected delivery is in the Fall of ’19. 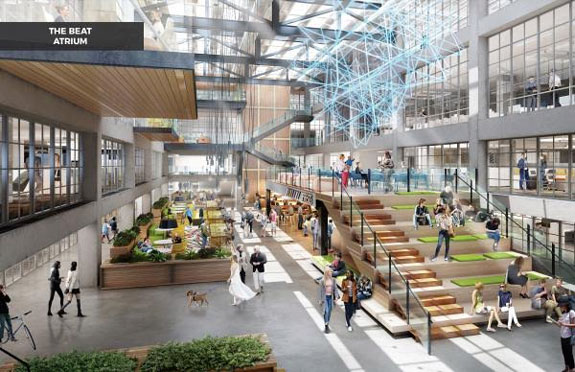 “The BEAT” (The Boston Exchange for Accelerated Technology) will be a life science, technology, and advanced manufacturing facility, a Nordblom spokesman said, its name an homage to the beat reporters who worked in the newsroom headquarters for more than 60 years before the paper moved downtown in 2017, a nod to the nearby Red Line as a neighborhood artery, and a gesture at the lively and open space they hope to cultivate at the fortress-like site.

“Our job is to create something to which people want to go, a great place where they want to work,” [Todd Fremont-Smith, senior vice president and director of mixed-use projects for Nordblom] said. “The city is out of space. The Seaport is done; Back Bay’s done.” And given the need for office, tech, and light industrial workplaces, he said, “we’re trying to do it in a creative and funky way that captures people’s imaginations.”