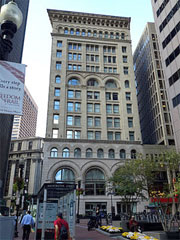 The Ames Building at 1 Court Street will be getting a new owner. The building is known as the Boston’s “first skyscraper”.

The Ames Building is a skyscraper located in Boston, Massachusetts. It is sometimes ranked as the tallest building in Boston from its completion in 1893 until 1915, when the Custom House Tower was built. However, the building was never the tallest structure in Boston. The steeple of the Church of the Covenant, completed in 1867, was much taller than the Ames Building. Nevertheless, it is considered to be Boston’s first skyscraper.

Located at 1 Court Street and Washington Mall in downtown Boston, the Ames Building was designed by the architectural firm of Shepley, Rutan and Coolidge inRichardsonian Romanesque and paid for by Frederick L. Ames. It is the second tallest masonry load bearing-wall structure in the world, exceeded only by the Monadnock Building in Chicago, completed that same year.[2] It is thirteen stories high with a three-story granite base and sandstone and brick. The sandstone is from the Berea formation in Ohio and was supplied by Cleveland Quarries Company. Construction was completed in 1889, but interior work was not completed for occupancy until 1893. It became the corporate headquarters for the Ames families’ agricultural tool company.[3]

The Ames Building was added to the National Register of Historic Places on May 26, 1974.