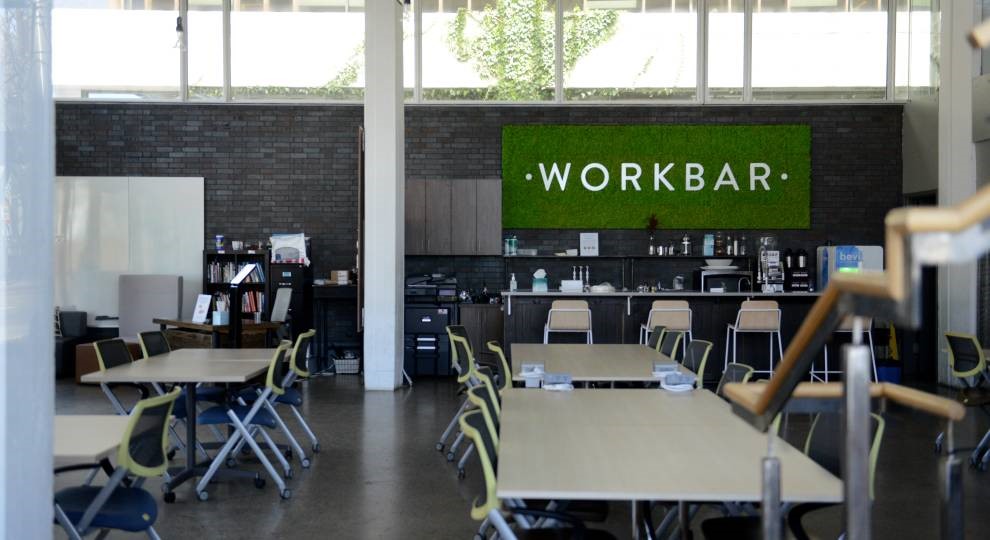 Whenever non-essential offices reopen, here’s the first thing to remember: About two-thirds of us probably won’t be going back in. At least not for a while.

For most offices, “the target occupancy is probably going to be no more than 30 percent,” said Arlyn Voglemann in the Boston office of the global design firm Gensler. “And people will achieve that in many different ways — who knows how long it will last.”

Gensler is working with building owners and tenants around the region to figure out the best way for people to return to work. And for many people, the best way to return may be not to return just yet.

The whole goal is keeping your distance. And while renovating or redesigning office spaces is a longer term project, in the short term, existing office space is likely to be used very differently, Vogelmann said. She cited conference rooms as an example.

“If a conference room has six or fewer seats, you’ll only have one person in there,” she said. “If it’s larger than that, you can have a couple of people in there, but no more than 10 occupants in any space at one time.”

Staff may be switched to shifts so all the desks in an office are not filled at the same time. And people are not going to be sharing keyboards, telephones or other technology for a while, Vogelmann said. Even if people are working in shifts, they are very unlikely to be sharing desk space.

“If you’re phasing your work approach, and you’re only going to come in on Mondays, Wednesdays and Fridays, you don’t want Bobby sitting at your desk Tuesdays and Thursdays,” said Patrick Schmidt, principal and VP at Avison Young, a commercial real estate firm. “You’re not going to trust whoever your cleaning person is, no matter what the protocols are, that they’ve properly sanitized the workstation. So everyone’s going to want their own spot.”

Peter Conway of the real estate firm Lincoln Property Company puts it this way: “Now the idea of shared is so toxic — I don’t know if it’s the best word to say it — but shared almost equals risk in a lot of people’s eyes.”

Conway said this may be a serious problem for WeWork and similar co-working companies that have seen huge growth in the Boston market over the past few years. These companies rent space in bulk from office buildings and then convert it into smaller spaces that offer tenants more flexibility. This allows a small company — or a small unit of a big company — to sign a short-term lease just for a desk or a room and share the kitchen and conference rooms with other tenants.

Shared workspaces have gone from basically nothing to 2.8 million square feet of office space in Boston over the past decade, according to research by Colliers International, a real estate services firm. Aaron Jodka, Colliers’ research director, said the profit margin for many co-working operators is based on reducing the square footage allocated to each worker in the space or renting each desk multiple times under the theory that workers will not all be in the office at the same time. But with concerns about infection now at the forefront, “the idea of packing in as many people as you can is not safe,” he said.

After a few months of having most employees work from home, Rowe said, “companies will say, ‘Gee, instead of having 100 people in a traditional office, I’m going to have a shared office and I’ll have 10 to 20 people that come in. Everyone else will work at home.'”

For those who do return to the office, it is going to be a very different experience.

Rowe says CIC is taking numerous steps to ensure the safety of their offices when they reopen, including asking everyone to check their temperature and confirm they do not have symptoms before they come to work. They are also going hands-free where possible.

“We’re converting our buildings to be touchless.” Rowe said. “We don’t think touch is a major vector, but we know that people are concerned about it and we’re not sure. So why not do that? So that means that we’ve found a way for every single thing, you know, you need to do in the office to be something you don’t have to touch with your hand. “

That means everything from touchless faucets to doors that can be opened with your foot to handing out a little wands that can be used to push elevator buttons.

Every conversation about the future of office space seems to return to the question of the elevator. Jim Roosevelt of the law firm Verill helped the Pioneer Institute assemble a “return to office” checklist for employers and building managers, and the elevator is high on that checklist.

“You can’t really socially distance more than a couple of people in an elevator,” Roosevelt said. “I’m not even sure you can do a couple in most elevators; in some elevators you’ve gotta do one. Even before they get in the elevator, there is the question of, ‘is it safe to have lots of people touching the elevator buttons?'”

That means there is likely to be some kind of traffic control in the elevator lobby, like a security guard limiting riders, making sure everyone is wearing a mask and creating safely-distanced waiting lines at busy times.

But the best traffic control strategy is to just work from home.

Nevertheless, even with concerns about contagion and the inconvenience of waiting on an elevator queue, people are itching to return to an office environment, said Wil Catlin, managing director of Boston Realty Advisors. What has been lost in the work-from-home experiment, Catlin said, has been “the organic hand-off of information that occurs from person to person, department to department, because they’re co-habitating, coexisting underneath one roof in one office.” When employees are scattered, he added, “everything is scripted. Everything. You’ve got to schedule a Zoom call. You’ve got to text. You can’t just like walk down the hall and say, ‘Hey, I’ve got a question about this.'”

That’s why Vogelmann says one of the long-term effects of the pandemic may be a move to more collaborative workspaces in office suites, and fewer closed doors.