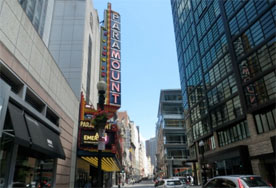 This is not the first period of growth or transformation for DTX, also known as Downtown Crossing.  In 1979, Washington Street was made into a pedestrian-only roadway following the success of Faneuil Hall Marketplace.  This resulted in a modest decline following the popularity of the vending cart program.

The fate of the neighborhood, now, seems set for a steep incline:

Bisnow states, “$210M Millennium Place mixed-use residential project that opened Q2 last year tested how housing would fare in the heart of this commercial neighborhood. All of its 256 condos sold by year-end priced from $550k to $3.5M. As one of the first Boston condo developments to be completed since the recession, it showed that buyers would put down stakes in the CBD, permanently changing the character of the historic neighborhood.”

A more detailed history on Downtown Crossing is available in the Bisnow article.