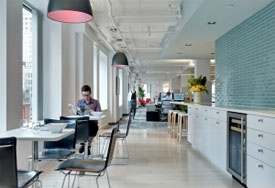 Creative services firms are leading the charge into the Downtown market with their open floorplans.  The Class A and B office landlords are renovating their buildings to accommodate this change.  745 Atlantic Avenue has done an amazing job creating a cool vibe once you enter the lobby and move through the common areas of the building.  The new lobby give the feeling of an open loft combined with upmarket finishes.  In addition, ownership combined a “media infused map” showing the history of innovation of our city.

From a Banker & Tradesman editorial:

Ad agency Arnold Worldwide’s move from Back Bay to 125,000 square feet in the former Filene’s building last summer was a milestone for the Downtown Crossing office market, where the 60-story Millennium Tower Boston condos are the most potent symbol of the city’s development boom…But the Financial District, which contains more than half of Boston’s 63 million square feet of office space, is undergoing its own post-recession transformation. Architects, digital media shops and tech companies are responsible for some of the biggest lease deals of the year.