The skyline in South Boston/Seaport has continued to change, and now when you disembark from your cruise ship, your hotel will be steps away. Please expect to see a 13-story hotel by 2017. 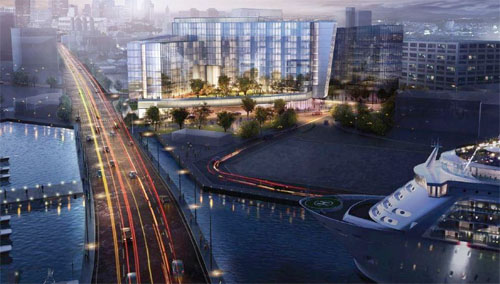 The Boston Redevelopment Authority voted late Thursday to allow a hotel developer to move forward with a [405-room hotel located adjacent to Boston’s cruise-ship terminal}. The developer, Harbinger Development LLC, would take out a long-term lease to build a 13-story building at the city’s Marine Industrial Park on the South Boston Waterfront.

Nick Martin, a spokesman for the BRA, said the city agency would begin negotiating with Harbinger, which is seeking a 70-year lease on the site known as Parcel A. Eamon O’Marah, Harbinger’s managing partner, said preliminary plans call for a 275,000-square-foot hotel that would be 10 stories on the side closer to the water and 13 stories on the other. He said he expected the project to cost $125 million.