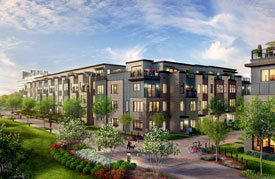 The suburban office parks as we know it might become a thing of the past like the VCR and home answering machine.

As more corporations flock to cities, they are vacating these office parks, many of which were built in the 1980s…But some of these parks are not staying empty. An increasing number of developers are converting them into housing, according to a recent Washington Post report.

A 2016 report by NGKF looked at office parks in five suburbs, and found that between 14% and 22% were “in some stage of obsolescence” (i.e. high vacancy rates, too much or not enough parking, the space needs substantial renovations). That suggests that up to 1 billion square feet of office space — or 7.5% of the country’s entire office inventory — is becoming obsolete for the people who work there.