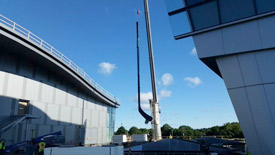 What is 68 feet tall and weighs in over 7,000 pounds? A giant hockey stick that will reside at the new practice facility of the Boston Bruins in Brighton, MA.

The replica stick, made of steel, was constructed by Diamond Iron Works in Lawrence. Owner Steve Doherty said that getting the blade to look right was the most difficult part for the 12.5:1-scale stick.

“We got about 450 man hours into fabricating the stick,” said Doherty.

The Boston Bruins said in a release that the area will be open to the public when the Warrior Ice Arena opens in September.