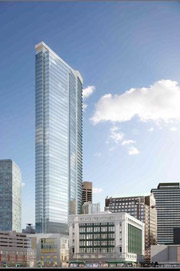 2013 was a big year for construction starts in the city of Boston. Will 2014 be the same as projected? Will construction commence above the Turnpike?

The Boston Business Journal posted a robust review of the top development projects in Boston over the course of the previous year. Among its findings:

One of the biggest events of the year saw construction crews returning to the former Filene’s site in Downtown Crossing…But Filene’s was not the only major development to see construction crews: Across town in Brighton, New Balance began work to convert a previously shuttered manufacturing plant into a new facility; in Westwood, a new team took over the stalled Westwood Station project and now promise to deliver on 2 million feet of mixed-use development along Route 128; in Chinatown, a section of the neighborhood that decades ago was taken to build the Southeast Expressway is now home to construction of a 21-story tower that will provide much needed affordable housing; and in the Seaport District, Skanska got underway with the first office for Seaport Square.

The complete article is available on the BBJ website, here.