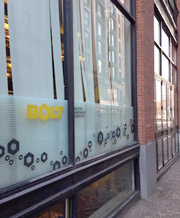 Startups continue to be the focus for 2014. The Boston office market has seen rents continue to rise within the Class B market – space that is favored by newly-funded startups. Buildings that are poised to offer newly built out space within the redeveloped Downtown Crossing are Druker’s 373 Washington Street with some floors at 4,524 rentable square feet. This becomes a perfect size as groups graduate from the CIC or Space with a Soul and establish their own home.

Boston.com published its expectations for the new year:

Coming in 2014: Kayak co-founder Paul English opens a new incubator/nightclub/exhibition space on Summer Street called Blade. WeWork, a nationwide network of co-working spaces, is planning two Boston locations, both near South Station, on opposite sides of Fort Point Channel. TechStars Boston is moving from Cambridge to Boston, as I first reported in October, to space on Lincoln Street in the Leather District.

The full article is posted on Boston.com