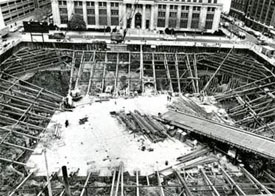 Boston is under a major construction boom which is evident as you look across our skyline.  The John Hancock tower was a major milestone in our city when the project broke ground in August of 1968.

The groundbreaking ceremony for New England’s tallest building, the John Hancock Tower, was on Aug. 21, 1968. The 60-story minimalist structure was constructed with huge panes of reflective glass that proved to be a problem in the 1970s. Many panes of glass crashed to the ground with high wind speeds, causing street closures and huge safety concerns. After pane replacement and structural fixes that stabilized the tower, the actual cost of the construction nearly doubled the projected budget.