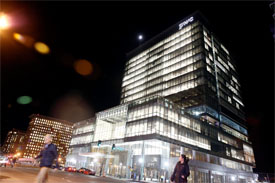 To get you companies name in lights on a building in Boston will now be a formalized policy according to the BRA.  Personally I am a fan of fewer signs rather than seeing our rooftops littered with every brand that occupies our city.

According to a Boston Globe article, “The Boston Redevelopment Authority is working on a new sign policy, one that would formalize by early next year the agency’s often-informal approach, just as Boston’s building boom could bring another round of requests for prominent corporate signage.”

More from the Globe:

“Quite often, when you go to other cities, you’ll see corporate names on top of buildings,” said David Carlson, the Boston Redevelopment Authority’s deputy director for urban design. “The general preference [here] is to not have a skyline dominated by corporate signs and instead to have a skyline that’s dominated by hopefully interesting buildings.”