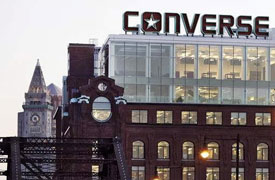 The roster of footwear brands with a headquarters or significant presence in Boston is vast and celebrated:

From The Daily Astorian:

“These companies cluster because they’re primarily looking for talent. You want to be where the people are,” said Matthew Powell, a sports industry analyst for the NPD Group, a New York-based market research firm. “They’re also trying to stay close to their consumer. Millennials are clustering in large cities, so it’s a great way to be plugged into where your consumer is.”