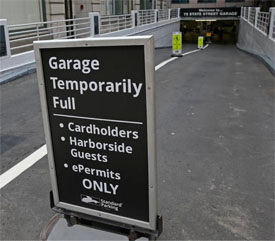 How long does it take for you to find a parking space or have you given up.  My father would say, as he combed the Financial District for the coveted spot, you have to believe.  Believe that there is a spot for you.  Well, for those that don’t follow that model, they have found that getting that spot is nearly unattainable.  I rely on the T and Uber, during prime time and use the believe method for early morning meetings.

A recent Boston Globe article indicates that the daily plight for Boston commuters is only worsening. “Boston’s current parking crunch is the product of conflicting ambitions. City planners placed parking caps on downtown and South Boston years ago, hoping to reduce pollution and encourage the use of public transportation, while mayors and developers pressed for business and residential expansion…James Gillooly, interim commissioner of the Boston Transportation Department, estimates about 3,000 spaces have been eliminated in the Seaport area over the past several years, as offices, condos and hotels have replaced open lots…’As this neighborhood grows,’ said Gillooly, “there will be spaces that used to be used by people in the financial district, who now have to come up with a new strategy of how to come and go from work.’’