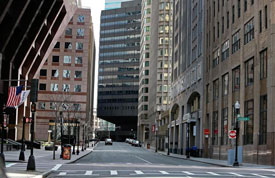 The value option in Boston office leasing, the Financial District, holds the single largest concentration of office space and workers. Submarkets like the Seaport, Kendall Square, and Back Bay are pushing numbers in excess of the pre-2008 crash.

Data from the Boston office of Colliers International show that vacancy rates for the upper reaches of buildings in the Financial District — floors 20 and above — are at their highest in nearly a decade. And as a whole, the Financial District lost more tenants per square foot in 2016 than any other area in the city, ending up with nearly 850,000 more square feet of vacant space than in 2015…The Seaport District remains the new “it” address, with companies leasing an additional 400,000 feet of office space in 2016.