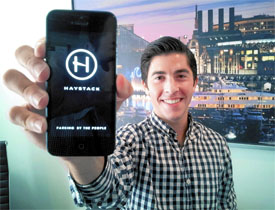 Selling information in some cities is OK, while in others, it’s frowned upon or outlawed. What would you pay to know that a parking space would be waiting in the Financial District? Would you post that information to an app for a couple of bucks?  Haystack hopes that you care to know in a number of cities across the country.

The opportunistic parking app, however, was not well-received in Boston by the city’s new Mayor. The Boston Globe described the strong response by city officials:

“Boston officials have escalated their rhetoric opposing a new mobile app that lets drivers trade public parking spaces for cash, but they are not doing anything to stop the service…Mayor Martin J. Walsh accused Haystack, the Baltimore startup that makes an app with the same name, of artificially inflating parking prices and giving some drivers an unfair advantage over others…the city’s Transportation Department ‘will take appropriate measures to prohibit any such app'”