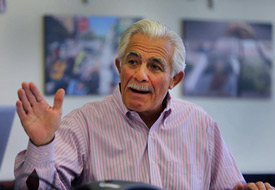 Boston Harbor might soon have a new development approved for its shores. It appears Don Chiofaro has amended his proposed plans for his new Boston Tower to conform to the city’s zoning rules.

[Chiofaro will] push forward with his bid to put a skyscraper on the site of the Harbor Garage, and to do it within proposed zoning rules that he fought for years to loosen without success. It would still be a billion-dollar-plus project, a bookend to the International Place towers he built in the 1980s, but not quite as grand as he envisioned.

It’s likely to be several months, at least, before Chiofaro can file specific plans with the BRA. Then, given a year or more for permitting, construction wouldn’t start until 2018, at the earliest.