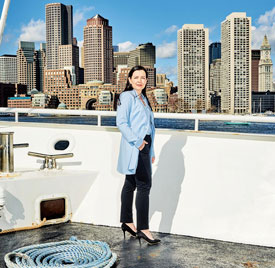 It doesn’t depend whether you are a regular in Boston or a tourist, getting around can be time consuming. Boston Harbor Cruises is positioning themselves to enhance their service offering by adding more water shuttle and taxi services throughout Boston Harbor. Most notably from North Station to the Seaport.

A lyrical snapshot from Boston Magazine describes the company, noting “Boston Harbor Cruises was founded in 1926, with a single boat rented by a West Ender named Matty Hughes, [Alison] Nolan’s great-grandfather. He offered sightseeing cruises along the Charles, coaxing his neighbors off the sweltering stoops of their apartment buildings for a cool trip up the river. The boat rides, which cost 10 cents, were a welcome treat on a hot day, even though the waters reeked of sewage and trash. Somehow, the filth didn’t stop Hughes’s new business from growing. He expanded his fleet and set up shop on India Wharf in the 1940s, adding tours to an even less desirable spot—the sludge-filled depths of Boston Harbor. If customers could brave the stench, they’d kick back while chugging past scenic landfills, including the one that used to be on Spectacle Island.”