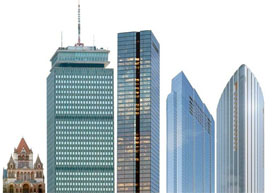 The city of Boston that is home to a wide variety of college, universities, professional sports team, hospitals and companies is changing.  We have created the Back Bay, built office tower and now adding more buildings to our skyline.  No longer are the tower views home to companies, but residences.

The Boston Globe has put together a retrospective, “A new age for an old town”, tracing the Hub’s commercial transformation. The article notes the following:

Today, Boston Properties, one of the city’s most prolific builders, is developing a 17-story office building on the final parcel within the Prudential complex. Meanwhile, the area around the Pru is exploding with new projects and proposals for hotels and towering residential buildings.

“It’s absolutely extraordinary,” said Bob Richards, a partner at Transwestern RBJ. “What’s driving it is the top-tier labor talent in industries like technology and life sciences. The young people who work for those companies want to live in an urban environment.”

Not coincidentally, the city’s population is rising more rapidly than it has in decades. The total head count rose by nearly 30,000 people, to about 646,000, between 2010 and 2013, according to the US Census Bureau. That’s more population growth in three years than Boston experienced in the 1980s and ’90s combined.