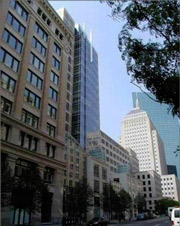 75 Arlington Street in Back Bay

Liberty Mutual Insurance is looking to take some cash off the table with their announcement that they will be selling 10 St. James Ave. and 75 Arlington St. in Back Bay.

The Boston-based insurer occupies about 40 percent of the 825,000 square feet of space in the two buildings, it said. In recent years, Liberty Mutual has moved some employees from the buildings into its new 22-story headquarters at 157 Berkeley St. that opened in 2013.

“We’re selling now because we fully occupy our new building,” spokesman John Cusolito said in an email. “The (St. James Avenue and Arlington Street) buildings are 96 percent occupied; however, owning and operating investment properties is not our primary business.”