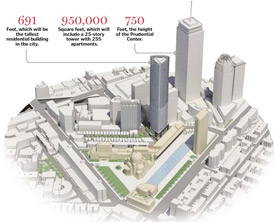 Our city continues to grow up. Literally. The newest building approved in Boston is 691 feet. The tallest current building in the city is the John Hancock, at 790 feet, built in 1976. Coming in second is the Prudential Tower at 750 feet, built in 1964. The only building to make the list and built in the 80’s, was One International Place at 600 feet built in 1987.

From 1987 to present we have not seen any new construction over 600 feet. Currently there are three projects that are all 600 feet plus.

The Boston Globe reported on the announcement:

“The 58-story building, at the corner of Belvidere and Dalton streets, will add another major peak on the high spine of the Back Bay and bring thousands of new residents and visitors to one of the city’s most celebrated landmarks…The 950,000-square-foot development also includes a 25-story tower with 255 apartments; both buildings will have retail and restaurant spaces. Construction is scheduled to start early next year.”

Jump over to the Boston Globe’s website to read the full editorial.