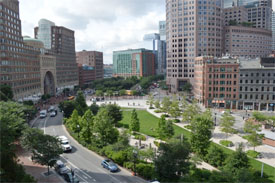 Yes, this should be renamed as it has become a landmark in our city.  Boston is confusing to navigate; Uber, Google and Waze have helped, but let’s give one of our new attractions a simpler address.

The debate, and subsequent argument for renaming the roads surrounding The Greenway is articulated by Bostinno.Streewise.co, noting “the Rose Kennedy Greenway is flanked by two parallel streets that run in a different direction. Atlantic Avenue winds northbound while on the other side, headed southbound, is a single street known at different points as John F. Fitzgerald Surface Road, Purchase Street, Surface Road and again John F. Fitzgerald Surface Road…By renaming what we’ll refer to here in this article as Surface/Purchase, pedestrians and non-natives would have an easier time making their way through Downtown, while the Greenway’s brand recognition would significantly increase—and that in turn would benefit the surrounding area and buildings.”

You can read the full article here: Bostinno.Streetwise.co – why this busy downtown Boston road should be renamed after The Greeenway.